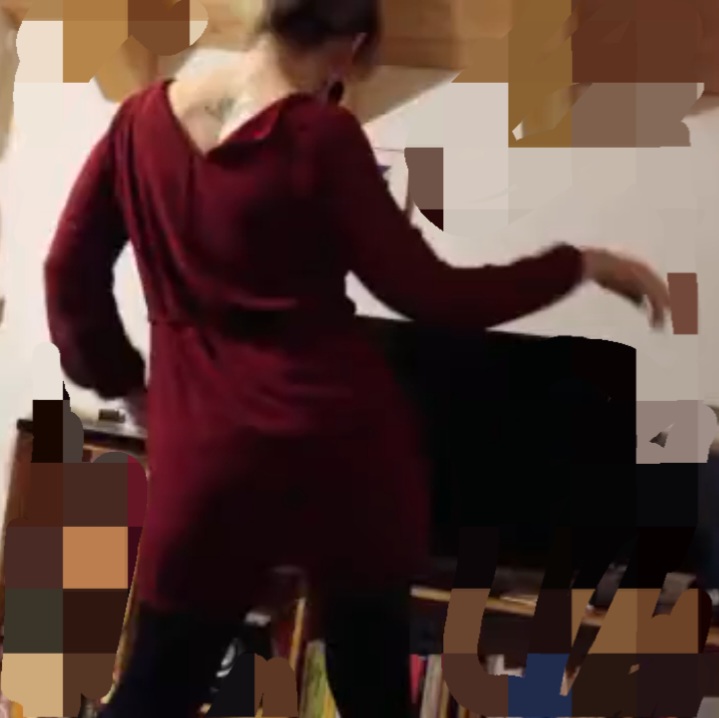 Do it at all hours of the day.

From when I open my eyes in the morning until late at night, and cannot sleep because the desire to do it never ends.

Moving your body following the music.

Who has never experienced it at least once in their life! Not everyone likes it, some feel awkward dancing, some feel ashamed……

I think I started dancing at the age of 9 … and I haven’t stopped since.

It was when we went on a field trip in elementary school and, after the cultural excursion, they took us to a disco at the end of the day. My first time…. And who forgets it!!!! I even wrote a poem about it, it was so impactful to enter that “cosmos of a thousand suns”, loud music, strobe and pounding lights, darkness in some corners, a perfect universe, perfect for me.

From that day on I realized that I could no longer help but experience those emotions, which I have also tried to reproduce at home. Some effect lights, a couple of candles, frankincense essence in the air and She, the Music: my Inspiration Goddess, Mother, Nurturer, Sister, Daughter, Life Partner. Impossible to imagine even a single day without … Even now that I am writing this blog I am accompanied by the celestial sound of a harp …. A music of another dimension ….

In this last period of my life I am constantly accompanied by music , in the car while I drive, while I work, at home while I clean or prepare food, obviously also while I paint …. There hasn’t been a single painting in which I haven’t had her company while my soul opened towards my inner world to translate it into colours.

Music for me is a portal, an access gate to new, unknown worlds and, at the same time, a lens through which to filter the reality in which I have fallen to live. It’s no coincidence that since I live from music to music, everything seems more beautiful to me, from the people I meet to the places I frequent; which doesn’t mean living in the world of fairy tales, rather it’s about knowing how to live this sometimes hostile world with a different impetus, with a mind more open to acceptance and understanding of why we are called to experience even painful or demanding experiences.

Today one person, while I was working, asked me how I felt and when I replied “Great! Very well!” he was even amazed at my enthusiasm! People are so used to living in emotional degradation that they almost fail to understand how it’s possible to have a positive attitude nowadays. It’s mistakenly thought that if one feels happy it’s because they have no problems, but that’s not the case. There isn’t a life that doesn’t have difficult and unforeseen situations, there are problems and they will always be; facing them with a smile and with confidence can make the difference. Living them with music, as if it were a soundtrack, means be able to transform them into opportunities for growth.

That’s why I will never stop listening to music.

That’s why I will NEVER stop dancing.